An interesting trip for the Transition Year class included a trip to the ‘Town Hall Theatre’ on the 6th of December in Galway city to watch Ger Carey perform ‘Psycho Spaghetti’ which is a comic journey into the teenage mind. This dynamic, imaginative, energetic show, challenges, entertains and teaches all at once. The show portrayed the teenage mindset with extreme honesty and classic humour. Both teachers and students loved it. This was followed by visiting the Christmas market.

On the 9th of December, Anne Buckley, a local florist taught the students how to make these floral decorations for the Christmas Market. The students learnt a new skill and the finished products were impressive as can be seen in the photographs. Each student in Transition Year made one piece and all were sold at the Market.

On Thursday evening, the tables were arranged with food, hats, positive affirmation postcards and floral decorations in the kitchen and due to the volume of produce the room next door was filled also with Discs of one and two candles, logs with tea lights, wooden Christmas scenes, trees with baubles, wooden and Perspex decorations. There were also pudding pompoms, Christmas cards, snow globes and framed photographs from the photography club in the school. We also organised a raffle and sold tickets on the day. Great enjoyment was had out of guessing the number of sweets in the jar.

The Christmas market was a great success and all money raised will go towards the Transition Year Fund and will contribute towards trips for the rest of the year.

On Thursday the 11th of November, the T.Y. students went on a trip to the Astrobay Galway activity centre in Renmore. Setting out early morning as usual, after the hour-long bus ride, the students arrived at the destination. The vast activity centre located next to a beach at the time submerged under the high tide, a great place for exercise in the fresh air. We were split into two main groups, each with two sub- groups. The first activity for my group was frisbee golf, which, to be honest, we didn’t find particularly enjoyable, mainly due to the strong winds constantly disrupting our throws. They made it impossible to get the discs into the baskets, as most of the throws were rather long-ranged. The next activity was Human Foosball. Like Foosball (table football), except with real people in a large inflated pitch. It requires a lot of teamwork, as everyone is restricted to their line on the pitch, just like normal foosball. This activity we found particularly fun and somewhat tiring. Afterwards we had a break, before moving on to the next activity – bubble football (bubble soccer). This was perhaps the most tiring one out of all, but also the most fun one. Playing football while wearing giant inflated bubbles. This involved bumping into other players and knocking them over in order to gain an advantage. In the end, everyone got distracted, forgetting about the ball, and instead focusing on bumping into each other with full force. Moving on to the final activity – archery. Of course, it did not involve real arrows as we were shooting at each other too. Instead, there were arrows with soft, blunt tips, which didn’t really hurt. We received masks for protection, and were shown how to properly shoot the bows. We played a game where you had to shoot the other team’s four targets. If the team’s four targets are hit, that team is out. The next game involved two teams shooting each other until one was down to a single person. As I have previous experience with archery, I found this activity easy and particularly enjoyable. Overall, the trip was excellent, and it is safe to say everyone had a wonderful time.

On the 14th of October, the T.Y. and LCA students of AMC Tuam, went on a trip to Pallas Karting and Paintball near Loughrea. The group set out in the early morning by bus, and after an hour-long ride, arrived at their destination. There they split into two groups, one doing the karting first, the other doing the paintball first.

For the karting, the group received racing suits, gloves and helmets, and were briefed about the rules and procedures of the sport. The race took place on a 1500m long track with multiple bends and corners, with karts that went as fast as 80kph. This might not sound that fast to some, though the actual driving really feels fast. Attacking the corners at those speeds brings adrenaline and excitement, as well as exhaustion. The steering on the karts was very heavy and really took a toll on your arms after a few laps, not to mention the g- forces your body experiences. It was also a first time for many, and some did spin out or go off track. The race lasted a total of around 16-17 laps.

For the Paintball Warfare, the group received vests, camouflage suits, ammunition belts, gloves and masks. After reaching the war area, the group was briefed about the rules, safety, and game modes, before getting the guns. With the players divided into two teams and ready to fight, they took positions in their respective parts of the area. It included wooden shacks, broken cars, containers etc., which provided great cover. After around 10-15 minutes of fighting, Team Red triumphed over Team Black. Next up was the free-for-all mode, where no teams exist, and you’re only out if you’re out of ammo. This game was a bit longer and appeared rather chaotic, with everyone shooting each other and making good use of the barrels and boards set up.

The group returned to school around 3 p.m. and had a rest for the last 30 minutes before going home, exhausted but delighted.

Overall, everyone believes this was an incredibly fun trip and many intend to visit the place again. Personally, I loved the karting since it’s a motorsport and I am a car enthusiast, so finally being able to take part in it was great.

Swim at Blackrock in Salthill, Galway

On the 23rd of September on a warm Thursday, T.Y students took a cold dip in the ocean at Blackrock. With the fresh breeze of the coast, the students, SNAs and even Mr. Kearney himself took the icy challenge into the waters of the North Atlantic.

After experiencing not only the cold, but also the saltiness of the North Atlantic, the students dried off themselves off and took a calm walk on the outskirts of Galway for a treat at McDonalds beside the Shopping Centre.

Having warmed up from not only the walk, but also from a delightfully warm meal, the students returned to the school, having experienced a very different Thursday.

On Wednesday, September 15th, we had a drumming lesson. We started by introducing ourselves one by one to the drumming instructor, Adam. Adam started of by explaining what we would be doing. The music was based on Brazilian Parade. He made sure everyone got an instrument. He started by having people volunteer to play the big drums using the drum sticks and a beat to follow. Next, he gave us a tambourine-like instrument. Then he gave us an instrument that looked and sounded like a bell and kept going until everyone had an instrument. Everyone played in a way that all the sounds together sounded beautiful.

It was really enjoyable and everyone loved it. The best part, however, was just listening to all the instruments being played together and enjoying the mindful moment. 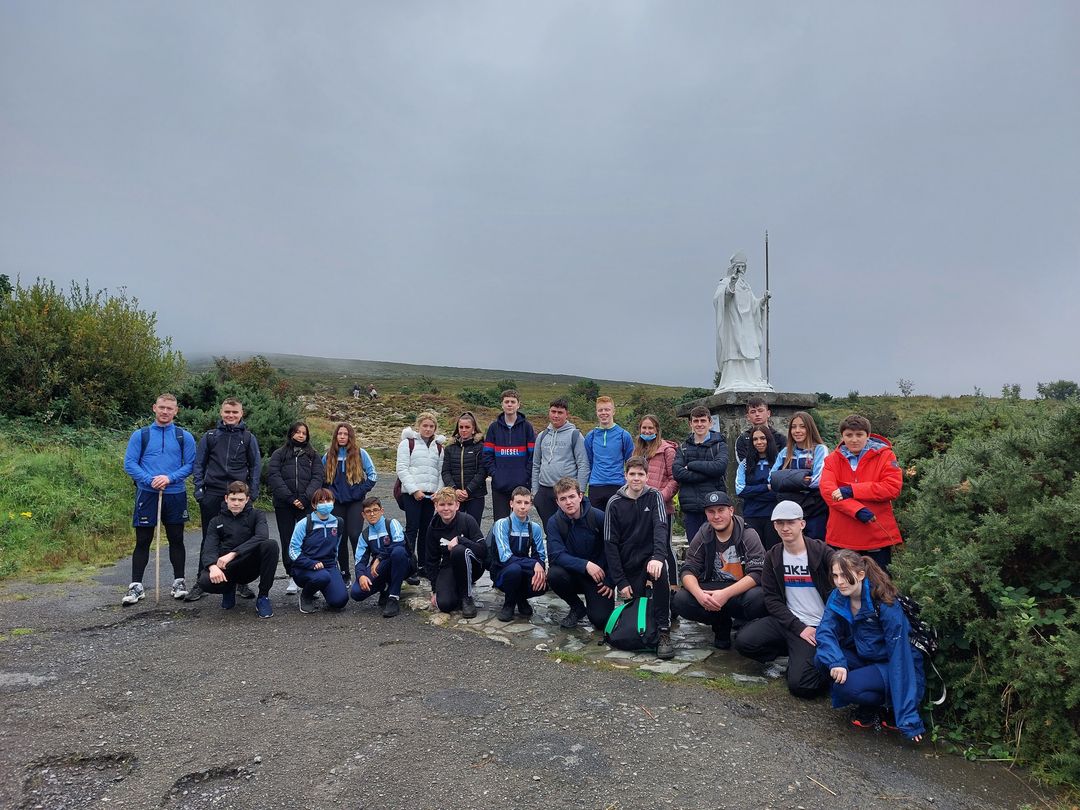 On Thursday, September 9th, Archbishop McHale College’s T.Y. students went on a school trip to climb Croagh Patrick, setting off early in the morning. After an hour or so of bus travel to County Mayo, the group arrived. Croagh Patrick is a sacred mountain with an elevation of about 760 meters. The trip itself was found pretty fun overall but also exhausting for many. While it wasn’t too demanding for some, the challenge was still there, especially for those who weren’t experienced. Multiple obstacles stood in the group’s path. Apart from the rocky and gravelly surface on the steep slopes, rain would occasionally appear, making it even worse for climbing, and causing multiple people to slip. Then there was the fog; so thick, like a white void, it was hard to see, and small groups of students would get lost and fall behind. Finally, possibly the most annoying one of them all – the biting insects. Tiny fly-like insects, attracted to sweat, would constantly bite any skin they managed to land on, essentially mini mosquitoes. Yet none of this served to dampen our spirits. The trip’s main purpose was to improve the students’ fitness, spend time outside in the fresh air, and team bonding. All of which were achieved in an adventurous day out. 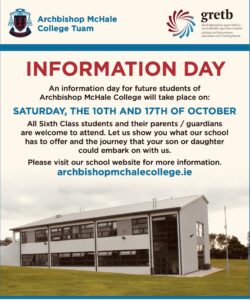 Welcome to Archbishop McHale  College website. Archbishop McHale College is a co-educational, multi- denominational school under the patronage of Galway Roscommon Education and Training Board.   Young people in Tuam and its hinterland are provided with unrivalled opportunities to excel academically in a friendly caring environment.

We seek to promote a caring and committed school community which will facilitate the education of our students and where each individual is valued as a unique human being. “Is ar scáth a chéile a mhairimid”

We use cookies on our website to give you the most relevant experience by remembering your preferences and repeat visits. By clicking “ACCEPT ALL”, you consent to the use of ALL the cookies. However, you may visit "Cookie Settings" to provide a controlled consent.
Cookie SettingsREJECT ALLACCEPT ALL
Manage consent

This website uses cookies to improve your experience while you navigate through the website. Out of these, the cookies that are categorized as necessary are stored on your browser as they are essential for the working of basic functionalities of the website. We also use third-party cookies that help us analyze and understand how you use this website. These cookies will be stored in your browser only with your consent. You also have the option to opt-out of these cookies. But opting out of some of these cookies may affect your browsing experience.
Necessary Always Enabled
Necessary cookies are absolutely essential for the website to function properly. These cookies ensure basic functionalities and security features of the website, anonymously.
Functional
Functional cookies help to perform certain functionalities like sharing the content of the website on social media platforms, collect feedbacks, and other third-party features.
Performance
Performance cookies are used to understand and analyze the key performance indexes of the website which helps in delivering a better user experience for the visitors.
Analytics
Analytical cookies are used to understand how visitors interact with the website. These cookies help provide information on metrics the number of visitors, bounce rate, traffic source, etc.
Advertisement
Advertisement cookies are used to provide visitors with relevant ads and marketing campaigns. These cookies track visitors across websites and collect information to provide customized ads.
Others
Other uncategorized cookies are those that are being analyzed and have not been classified into a category as yet.
SAVE & ACCEPT